There are plenty of strange sights to keep you entertained in China – Dongyang’s spring delicacy of boiled eggs soaked in the urine of young boys (or “virgin boy eggs”, as they are called locally); whole sharks and crocodiles for sale in the supermarket – but not satisfied with this basic level of weirdness, the country has been redoubling efforts to attract visitors with ever-wackier attractions.

This summer alone, China has unveiled three variously inventive ways to endanger the lives of plucky visitors. Here are a few choice picks of China’s most extreme attractions, past and present.

In August, a skimpily 5ft wide, glass-bottomed walkway opened at a height of 4,600ft on Hunan’s Tianmen Mountain. Coiling around Tianmen’s cliff face for a distance of 100 metres, masochistic brave tourists ‘enjoy’ the walk with an unobstructed, vertiginous view of the plunging valley below. 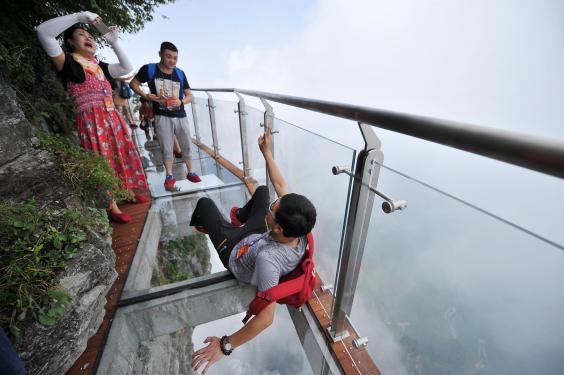 The glass-bottomed walkway gives a view over a 4,600ft abyss (VCG/VCG via Getty Images)

In the same month, the world’s highest and longest glass bridge opened – again in Hunan – yawning teasingly over the Zhangjiajie Grand Canyon. Spanning 430 metres across the 985ft drop below, the six-metre wide bridge was closed only two weeks after opening owing to dangerous demand. An official told press the bridge could safely hold 8,000 people per day, but 10 times that amount of folks had been turning up to walk on it. The bridge is apparently now undergoing an “internal system upgrade” to ensure it can manage the overwhelming visitor numbers. 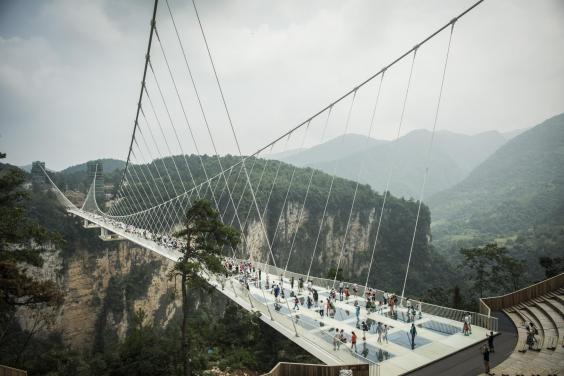 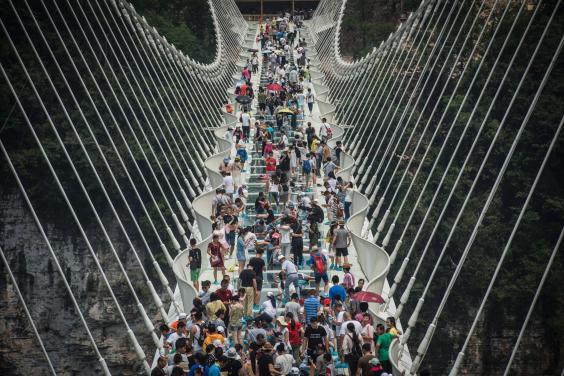 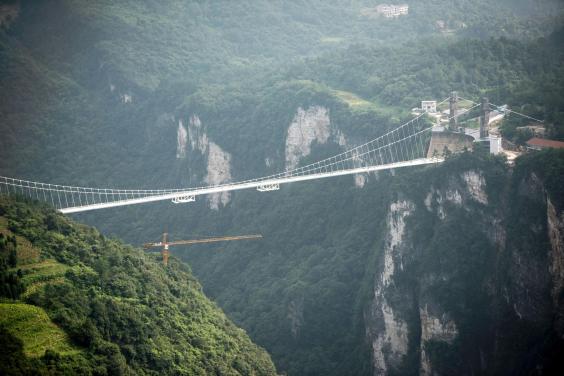 Only this month a terrifying video of a visitor swinging over a 1,000ft drop at Wansheng Ordovician Theme Park near Chongqing set the internet aflutter. The flimsy rope swing is pushed by an architect of doom member of staff, sending the (nervously?) smiling passenger high into the air as a foggy chasm plummets underneath.

Swinging over a 1,000ft drop passes for fun in Chongqing

Hats off to the bright sparks behind this inspired feat of engineering, which transforms your run-of-the-mill observation deck into a fairground ride teetering near the top of a 1,968ft skyscraper. Guangzhou’s Canton Tower was briefly the tallest tower in the world before Dubai stepped in with the record-busting 2,722ft tall Burj Khalifa. But the real selling point is the rollercoaster-like track that circumnavigates the Canton’s sloping, elliptical observation deck at around 1,500ft off the ground. Sixteen transparent pods circle the track to give 360-degree views. Each takes between 20 and 40 mildly alarming minutes to do the circuit, set at a 15-degree angle. 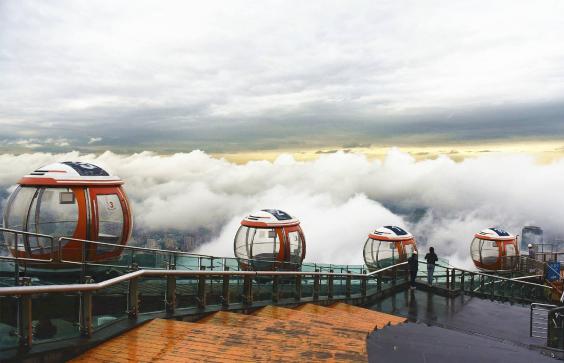 Shanghai’s unabashedly bizarre “sightseeing tunnel” – bear in mind this is a tunnel under a river, from which the city’s sights are markedly absent – is always worth a mention for being so thoroughly bonkers. Linking the futuristic Pudong district with classic-looking waterfront area The Bund, which are separated by the Huangpu River, the 10-minute train ride in glass cabins sees passengers subjected to bright lights and whirling lasers, while an ominous voiceover booms enlightening phrases like “nascent magma” and “fossiled variants”. All the more bamboozling when you consider catching the public ferry from one side of the Huangpu to the other costs less and allows you to see actual sights. 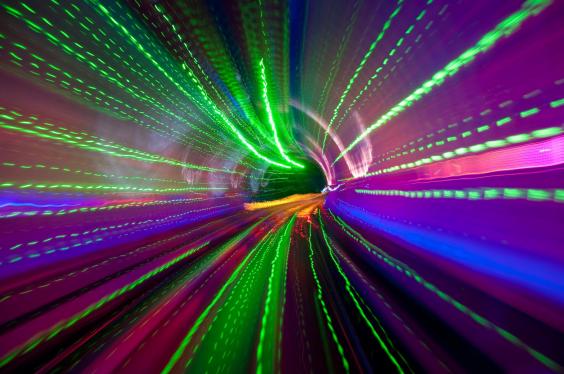 The Bund Sightseeing Tunnel in Shanghai is a journey through time, space and futility (Yu Morita/Flickr/CC BY-SA 2.0)

A tourist attraction in the same sense that travellers emboldened by the freedom of life on the road are compelled to head kamikaze-style down Bolivia’s Yungas, the Guoliang Tunnel was hand-carved 400ft up the side of a mountain in Henan province back in 1977. The 20ft-wide road carries both foot traffic and vehicles for a dizzying 1,200 metres, with the risk of simply falling off into the abyss very real.  While drivers constantly honk their horns to help prevent collisions, the rising number of tourists visiting for the thrill alone can hardly be making things easier. 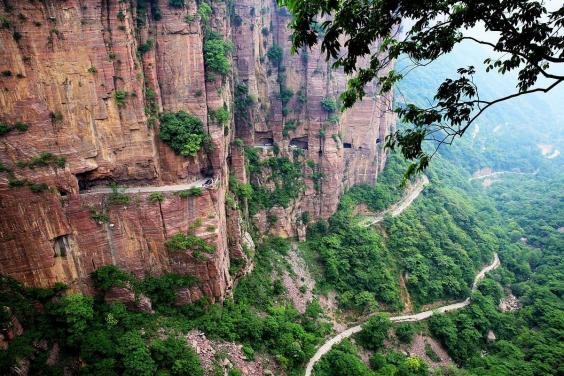 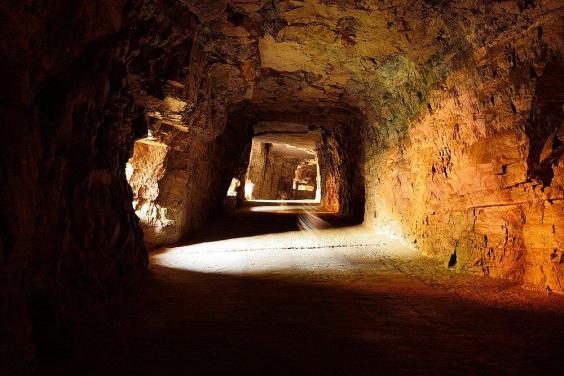 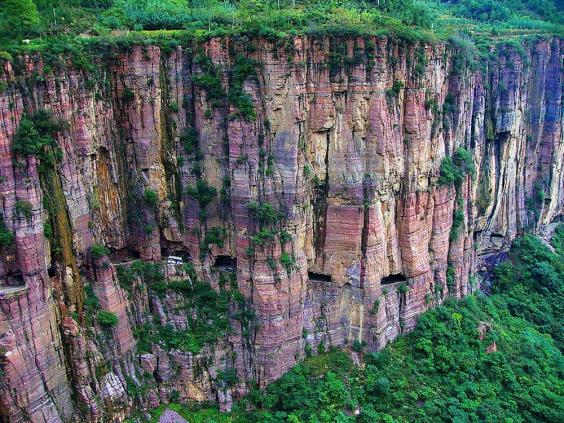 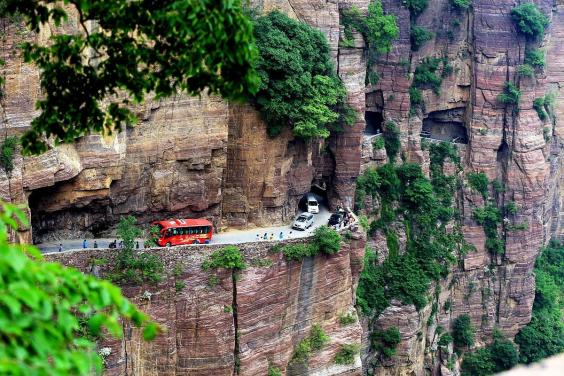