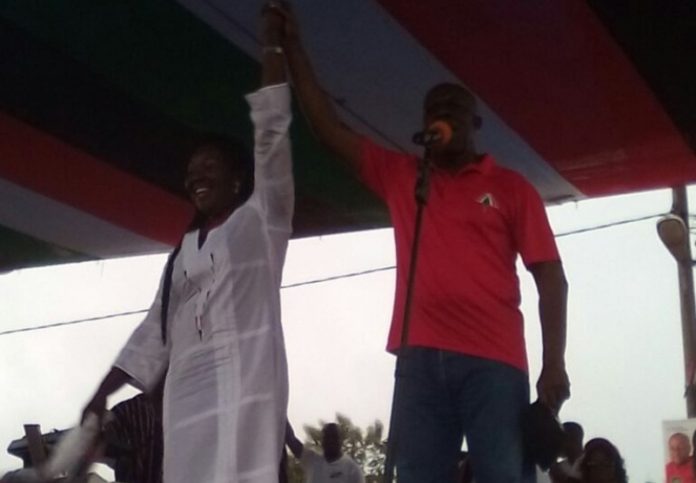 The vice president Kwesi Bekoe Amissah-Arthur is appealing to the electorate to retain President John Mahama in power in order to complete his “unfinished business.”

He said the Mahama-led administration means well for Ghanaians and poised to carry on with its agenda to transform Ghana over the next four years.

Addressing supporters of the National Democratic Congress (NDC) at the campaign launch of the Eastern regional minister Mavis Ama Frimpong, who is the parliamentary candidate for the NDC at New Abirim constituency, Mr. Amissah-Arthur charged them to target floating voters to enlighten them about the “monumental work done” by Mahama.

“Everyone here is NDC supporter who will definitely vote for NDC, but there are some people out there who do not have any party so I am entreating you to go house to house to campaign with the good news to draw their attention to the good work done by President Mahama to vote for the NDC. President Mahama is working but has unfinished job to complete to transform the country,” the former governor of the Central Bank said.

He also urged the supporters to give Mrs. Frimpong their massive vote come December 7 in order to represent the constituency in parliament.

The director of election for NDC, Mr. Ofosu Ampofo, called on the Akyems to change their voting pattern by voting for the NDC, “which has brought them developmental projects to improve their living standard.”

He said even though the opposition NPP enjoys massive votes from the Akyem enclave, the party does “nothing to improve” the lives of the people when in power.