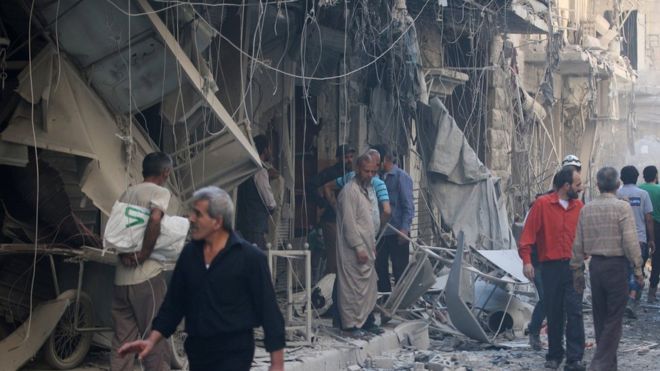 Russian planes have resumed air strikes on rebel-held districts in the city of Aleppo, in what activists say is the heaviest bombardment in days.

At least 25 people are reported to have died, including children.

The bombardment follows a temporary lull called by the Syrian government, partly to allow civilians to leave rebel areas in the east of the city.

It has come under intense aerial attack since a ceasefire brokered by the US and Russia collapsed last month.

He had been due to meet French President Francois Hollande later this month but pulled out after Paris said talks would be confined to Syria, French presidential sources said.

On Tuesday UK Foreign Secretary Boris Johnson told the UK parliament Russia was in danger of becoming a pariah nation because of its involvement in Syria.

The UK-based Syrian Observatory for Human Rights reported that at least 25 civilians were killed in Tuesday’s air strikes and considerable damage was inflicted on several areas.

The observatory said Russian war planes had dropped so-called “bunker busters” and other bombs, with children thought to be among the dead.

Footage shared by activists showed lifeless bodies of toddlers wrapped in sheets, with their parents distraught beside them.

Some of the most intense attacks have come in the Bustan al-Qasr and Fardos neighbourhoods near the citadel, which sits near the front line with the government-held west.

Aid organisation Medecins Sans Frontieres said on Tuesday there were now only 11 working ambulances left in the city because five had been hit by bombs and another eight were missing essential spare parts.

Diplomatic efforts to revive the ceasefire have so far come to nothing.

The UN has warned that eastern Aleppo, where an estimated 275,000 people still live, could face “total destruction” in the space of two months.

Last week, Russia vetoed a UN Security Council resolution drafted by France calling for an end to the bombing in Aleppo.