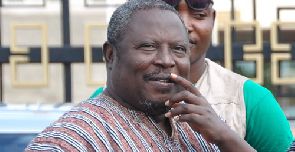 Martin Amidu, former Attorney-General and lone crusader to retrieve Ghana’s ‘stolen’ money from Alfred Agbesi Woyome has castigated President John Mahama for openly defending Alfred Woyome after the Supreme Court had ordered that Woyome be allowed to reveal how he spent the money

He said it is unfortunate that the President who has sworn constitutional oath of office to uphold and defend the Constitution of Ghana granted interview to the press and condemned the decision of the Supreme Court to allow Woyome to appear before it to give details of how he spent the money wrongfully paid to him,

He alleged that, regarding the way the President has started ‘intimidating’ him (Amidu), he would not be surprised if the President uses his executive powers to stop the Supreme Court from going ahead to allow Woyome to give details of how he spent the state money.

“The conduct of the President convinces me as a senior and foundation member of the governing NDC that he would do everything in his powers to ensure that the examination orally on oath of lootee for whom his government looted the public purse, may not come on, on Thursday, November 24, 2016,” he said stressing that President could subvert the cause of justice so that the people of Ghana do not hear the truth about the loot of the public purse he (President) led until after the elections on December 7, 2016.

“Once the President of the Republic had unconstitutionally castigated and questioned the independence of the judiciary in granting my application, and after charging me with spreading falsehood, he then let loose his attack dogs,” he noted saying that the deputy Minister for Justice and Attorney-General, Dr Dominic Ayine who represented the government in the Supreme Court and opposed the application went public to mount contumacious attacks and insults on the decision of the court and on him (Martin Amidu).

“People who know me closely, including my teachers and lecturers, know that I have throughout my life stood for the principles I believe in and in my own conscience and that it is strange that Dominic Ayine whose family has benefitted from my upright character, insults me because the President has set him against me,” he charged.