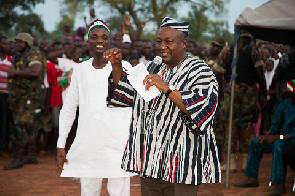 Many people, especially chiefs, are benefiting from President John Mahama’s car donation, the latest being the regent of the Abudu Royal Gate of Dagbon, the Bolin Lana Mahamadu Abdulai.

The regent received a brand new Toyota Fortuner with registration number GN 7732-16 which was said to have been presented to the Bolin-Lana through Mohammed Samasama and one Alhaji Sisu on behalf of the President in Yendi.

The presentation of the Toyota Fortuner to the Bolin-Lana has sparked several reactions from both the Abudu and Andani circles.

While those from the Abudu Family see it as an attempt by the President to obtain votes from the Abudu Gate, others think it is a reconciliatory move by President Mahama to make up for always ignoring the Bolin-Lana’s palace anytime he visits Yendi.

Some members of the Andani Royal Gate, however, think it is a betrayal for the President to now be friends with members of the Abudu Gate when they (Andanis), are those who always vote for the NDC in elections.

Some Andanis are also of the view that the donation of the vehicle to the Abudu regent is aimed at performing the funeral of the late Yana Mahama Abdulai.

Others believe that the recent visit of the presidential candidate of the NPP, Nana Addo and his Vice, Dr Mahamudu Bawumia, to Yendi to a rousing welcome probably accounted for the donation of the vehicle.

It is left to be seen whether the donation of the vehicle to the Abudu Regent would pull more Abudu members and NPP to the NDC in Yendi.