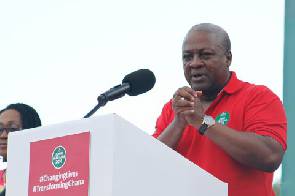 President John Dramani Mahama has indicated that he has done his best for the country by executing numerous infrastructure projects.

“When former President John Agyekum Kufuor assumed office, he continued from where Jerry Rawlings left off and the late Atta Mills also came to do his part and I also came to continue. I will not say I have completed all the jobs but I can say I have done my best for my country,” he indicated.

Addressing supporters of the National Democratic Congress (NDC) in Sekondi on Thursday as part of his four-day campaign in the Western Region, President Mahama disclosed that when he assumed office, his government decided to invest in five key areas- water, electricity, health, education and roads.

President Mahama noted that over 75 kilometers of asphaltic concrete roads had been constructed in the Sekondi-Takoradi metropolis alone while 97 percent of children of school-going age were in school.

“President Kufuor once said the four-year term of every president in Ghana was meant for laying solid foundation.

“I am saying I have built a good foundation so I am calling on you to give me another four-year term to put up the building,” President Mahama told the NDC supporters.

He indicated that Sekondi-Takoradi Metropolis was booming because the sea port, timber industry and the railway company were operating effectively.

He noted that while the port was still active because of the injection of foreign investments, the railway system seemed to be collapsing partly due to the lack of capital injection in the sector.

President Mahama said the timber business was also declining due to climate change and deforestation.

In my second-term in office, the Port and Railways would emerge as it used to be during the regime of the first President of Ghana, Dr Kwame Nkrumah to help revive the railway system and create jobs, he indicated.

“I have already discussed the initiative with the Director of Port and we have begun putting in place the necessary documentation.

“The government has also signed an agreement with the Japanese Government for an expansion work to be carried out at the Bosumtwi-Sam Fishing Habour in Sekondi,” he disclosed.

He stated that “some Japanese consultants and contractors are already in the country to begin the work. There will be new cold storage room, ice block making machine and new fishing net mending area, among others.”

He mentioned that the government had started constructing the railway line from Sekondi-Kojokrom-Takoradi as part of efforts to revive the railway system.

The president told the people that his government had not discriminated against the people of Sekondi and Takoradi even though the NDC has not won the seats for a very long time.

He mentioned that the expansion of the Takoradi Port would help bring in more ships and create about 3,000 direct and indirect jobs.

“Our opponents are saying the roads, hospitals and the other projects are not edible and that my government is only incurring huge debts and embezzling state funds, but I want to ask them if people have money in their pockets but can’t get any hospital to go to when they are sick, then you ask yourself what then is the use of the money?” he quizzed.