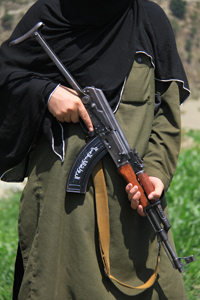 Raising its black flag over the rugged mountainous regions of Afghanistan, the Islamic State of Iraq and the Levant (ISIL) has emerged as a new threat to the war-ravaged country as it battles the Taliban for supremacy.

Employing violence and brutality to impose its will ,  Wilayat Khorasan, (the ancient name ISIL has chosen for the region made up of Afghanistan, Pakistan and parts of neighbouring countries), has emerged in seven different areas and vowed to step up operations, where the veteran fighters – the Taliban – once held sway.

Fighting to reconstitute the historical Khorasan into the so-called “caliphate” of Abu Bakr al-Baghdadi, the group says it has grand plans for the region, starting with uprooting the Taliban and the government of President Ashraf Ghani.

Causing friction with the regional and overall leadership of the Taliban, armed battles have increased over the past few months with dozens of Taliban fighters killed in clashes, most notably in the Taliban stronghold of Nangarhar province.

ISIL’s local chapter has also managed to attract dozens of fighters from the Taliban’s ranks into its fold, while foreign fighters unable to make it to Syria and Iraq have thronged to the group’s territory.

In ISIL and the Taliban,  we look at the group’s growing popularity, how it made steady inroads into the country, and the threat it poses for the future of  Afghanistan.

We gain unprecedented access to ISIL’s central leadership and meet children as young as five years old being trained to fight and dedicate their lives to the ‘caliphate’.

Making ISIL and the Taliban

The Islamic State of Iraq and the Levant (ISIL) group has arrived in Afghanistan and is planning to replace the Taliban as the major belligerent force opposing the government in Kabul. That’s the simple message contained in our new film for Al Jazeera. But, of course, the reality is far more complex.

The precursor group to ISIL, comprised mainly of disaffected Pakistani Taliban, first began making inroads into Afghanistan in 2014, announcing their arrival with the hanging of a dozen Taliban commanders in Nuristan Province.

But even before that, ISIL fighters had been travelling from Syria and Iraq to training camps just over the Pakistani border – something the Pakistani intelligence services, the ISI, would have been fully aware of and, more than likely, acquiesced to.

Today, ISIL has a presence in at least seven Afghan provinces, most strongly in eastern Kunar Province, which is where we chose to attempt contact.

Their aim is to reconstruct an historical province known as Khorasan and to incorporate it into the newest caliphate.

A vast territory extending across north central and eastern Iran, southern Turkmenistan, Uzbekistan and Tajikistan and spreading southwards across Afghanistan, Khorasan was an important region in early Islam. Some Arab geographers have even suggested that its reach went as far as the modern borders with India. But then, ISIL’s stated ambitions have always been rather grand.

Professionally filmed and edited beheadings, hangings and massacres are the group’s brand logo. In one example, from spring 2015, which we show in our film, they force a group of 10 elders, who had previously accommodated the Taliban in their districts and villages, to kneel on landmines. They are blown up, their torsos scattered across a wide expanse.

It’s genuinely horrendous, but what’s particularly unpleasant about this stunt (for that is what it is) is the fact that it is filmed with three separate cameras and then skilfully edited to music as the gore reaches its crescendo.

[For anyone inclined to watch that scene, don’t bother tuning into our film – we don’t show these gratuitous final moments.]

Establishing Khorasan will require conquering territory in at least five modern states – an enormously appealing concept to many of the most extreme elements from those countries, who have grown frustrated with the limited ambitions of their own groups.

And that brings us to perhaps the greatest difference between the Taliban and ISIL: The Taliban’s professed aims begin and end within the boundaries of Afghanistan.

“But ISIL is saying: ‘We will attack America, we will attack everywhere. We want one Islamic country and that means the Islamic Caliphate.”

The Taliban is itself facing major internal difficulties.

It may have shown what appeared to be a united front when it briefly captured the northern city of Kunduz in September this year, but that operation had been planned for many months before the announcement of the death of its leader, Mullah Omar, in the summer of 2015. He is believed to have died at least two years earlier, but this was kept quiet in order to maintain cohesion.

Since the announcement, the Taliban had faced – and still faces – the prospect of a break-up, as the older heads, under the newly appointed Mullah Akhtar Mansoor – who is widely believed to have been the choice of Pakistan’s ISI – and younger commanders, opposed to Pakistan’s influence in their country, clash.

Despite its recent moderate success in Kunduz, it is rumoured that the schism is growing, with the opposition to Mansoor being led by Mullah Omar’s son.

It is a divide ISIL will be eager to exploit.

And it is into this scenario that my colleague, Najibullah Quraishi, who has frequently brought stories to light from behind Taliban lines, ventured in recent weeks, risking life and limbs to become the first journalist to gain full access into ISIL units in Afghanistan.

As I sat giving instructions from the safety of Kabul, it was Najibullah who headed into the hills and mountains of Kunar Province, from where ISIL is already expanding its reach.

We had worked on the details and contacts for months, but, in truth, Najibullah was about to walk into the unpredictable and dangerous unknown. ISIL’s penchant for torturing and beheading journalists is well documented, and no amount of preparation could guarantee that Najibullah would make it back out.

I have previously put my life in the hands of al-Qaeda when attempting an interview with Osama bin Laden, but ISIL is an entirely different case. With them, agreements mean little and death can arrive on a whim.

Rarely have I been more concerned when a colleague left on assignment.

He and our fixers (whom we do not name for security reasons) spent several hours travelling by car and then by foot before being met by an armed ISIL scout in a deep valley by a high ridge in the spectacular Hindu Kush mountain range.

He informed them that they would have to climb the ridge and then, only when they felt it safe, would other fighters emerge to taken them on to their local headquarters.

The greatest fear of both ISIL and the Taliban is armed drones – many of their fighters have died in drone attacks in recent months – so they make every effort to avoid coming together in large numbers.

So it was that, when our team reached a rocky plateau above the ridge, a group of around 10 ISIL fighters materialised as though from nowhere.

After another hour’s walk, they arrived at a village. The scene they found there could hardly have been more surreal: ISIL fighters were sitting around a tree, having lunch, as local children gathered around, excited by their presence. Our team’s movements were highly restricted, but wherever they looked, there were no parents in sight.

Following lunch, three commanders sat together on the ground as children held the black flag of ISIL as a backdrop to their interview. Each one gave predictable pronouncements demanding the establishment of a caliphate and denouncing the US and it’s “stooges”, the Afghan government.

The three were positioned in such a way so as to appear equal, but it became clear that the one in the middle, known only as Abu Rashid, was more equal than the others. He spoke fluent Arabic and it was soon obvious that he was the link man between this group and their controllers in Iraq. He had defected from the Afghan Taliban to answer the call of ISIL’s leader, Abu Bakr al-Baghdadi.

“We were fighting jihad under the leadership of [the] Taliban,” he explained. “At the time, fighting with them was the right thing to do because there was no caliphate.”

“But God says that once there is a caliphate, to leave any other group and to follow the caliphate, the Quran and the Islamic system.”

But one of the other leaders, Jalal Khan, insisted his motivation came only from a desire to establish a caliphate and to oppose the infidels and their allies. And, among their ranks, he placed the Taliban.

“It’s the same with those working  for Afghan i ntelligence. In fact, anyone working for any of the intelligence services rejects our leader, Caliph Baghdadi.”

Our team was granted relatively free access to the fighters, who had clearly been given orders to cooperate from above. This included being permitted to interview two would-be teenage suicide bombers who, on the one hand, appeared frustrated at having not yet fulfilled their mission and, on the other, talked excitedly about their hopes for when they grow up.

Their motivation for dying was never made entirely clear, but what was apparent was that these boys had never attended school, could have known little about the target of their attack and were prime fodder for ISIL programming.

But even more disturbing than this was the way in which ISIL targets very young children. While the Taliban insist that young boys and girls spend years learning the Quran by heart, ISIL adopts a more direct and deliberate form of indoctrination – one involving guns and grenades.

Clearly determined to capture young minds from the outset, children as young as five are given practical lessons in how to fire pistols and sub-machine guns and how to throw grenades.

As their fighter-teacher, Abdullah Gul, explains to Najibullah in the film: “Islamic law tells us to give children all essential skills. We teach them, and we give them military training so they are prepared in mind and body so they are set on the right path and eachf generation will learn and teach in turn.”

“So you want the children to learn about weapons and fighting?” asks Najibullah.

“Yes, of course we do,” answers Abdullah.

True to form, our team finally comes under threat from one of the ISIL commanders and is forced to make an extremely swift exit. What became clear, though, is that ISIL is planning to be around in Afghanistan for a long time to come.