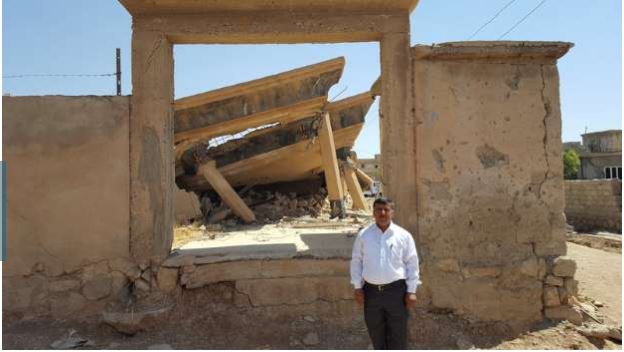 From the terrace of the house Abu Suhail occupies, you can see Iraq’s ethnic fault lines widening.

Like many houses in this northern Iraqi town, the drab concrete building used to be owned by an Arab family. Abu Suhail, a Kurd who owns a small shop, lived down the block. He and his family shared glasses of tea with their Arab neighbors; his two sons played with Arab kids in the streets.

But after Islamic State seized Zumar during its lightning sweep through northern and western Iraq in 2014, most Kurds fled, leaving the town to the Sunni militant group. Two months later, the Kurds hit back, pushing Islamic State out. Now, Zumar is populated almost entirely by Kurds, many of whom, like Abu Suhail, have had no qualms about seizing homes. He said the Arab who owned the house he has taken supported Islamic State.

The same shift can be seen in towns and villages across the ethnically mixed ribbon of land that divides the autonomous Kurdish area in the north of Iraq from the Arab-majority part in the south. As the peshmerga – Iraqi Kurdistan’s fighting force – have battled Islamic State, many Arabs have been forced from their homes.

Ordinary Kurds have come in behind, seizing properties, destroying buildings, and grabbing farmland. In total, Kurds have increased the size of the region they control in Iraq by around 40 percent since 2014.

This is how the map is being redrawn across Iraq and Syria: Groups fighting Islamic State are using the battle to settle older disputes and expand their territory.

But others, including many in the Iraqi government led by Haider al-Abadi, say the Kurds are creating new grievances and setting up future conflicts. The growing sway of Iraq’s Kurds is also worrying neighboring states, which fear their own Kurdish minorities could follow their ethnic brethren in Iraq.

Tensions have been rising in the past few months as Iraqi government forces, Kurds and Iranian-backed Shi’ite militias gear up for an offensive to drive Islamic State from its stronghold in the city of Mosul. The members of the uneasy alliance share a common enemy, but they agree on little else.

You can see the tension in the graffiti – “Reserved for Kurd” and “Long live the Kurdish state!” – painted on walls in areas once held by Islamic State. In Zumar, a burnt-out Arab home bears one word in dark red paint: “Kurd.”

Around the corner, the house of another long-time Arab resident appears to have been bulldozed. Abu Suhail said the owner had supported Islamic State.

“The Arabs know right returns to the rightful owner,” he said, sitting in his father’s home near the house he now claims. “Now our lands are in our hands.”

Falah Mustafa, the head of the Kurdish department of foreign relations, agrees. Many peshmerga have died fighting Islamic State, he told Reuters. The Kurdish government “cannot allow the sacrifices to be in vain by reinstituting Arabisation, which is the policy of the former regime. Definitely the Arabisation process has to be reversed.”

Kurds see consolidating their territory as an important step to statehood, which they have wanted ever since European powers carved up the Ottoman Empire a century ago. The new borders defined modern Iraq but spread the Kurdish people between it and three of its neighbors.

In Iraq, Kurds were regularly repressed, especially under Saddam. Zumar is a case in point. The old village was submerged in the 1980s during the construction of Mosul dam, Iraq’s largest. When water levels in the dam are low, the tops of the tallest buildings can still be seen.

Saddam built a replacement village on land that the Kurds say was taken from them. There, and in Kurdish areas across northern Iraq, he spent the next two decades resettling Arabs.

Things changed after the U.S.-led invasion in 2003 toppled Saddam. After the first Gulf War in 1990, the Kurds had carved out an enclave that was protected by a no-fly zone backed by a U.S.-led coalition. With Saddam finally gone, the Kurds became more powerful. Many returned to their villages, or what remained of them. Arabs left, sometimes under duress, often of their own accord.

A new constitutional provision called for a referendum on the future of the border areas. But the process festered because Iraq’s fractious political class could not agree how to implement it.

Abu Suhail, now 40, was not yet born when his ancestral village was torched in the 1970s. His family settled in another village. But by 2005, they decided to join other Kurds returning to Zumar and buy land there.

The arrival of Islamic State in August 2014 revived old fears. In an interview last year, Kurdish President Masoud Barzani told pan-Arab daily al-Hayat that many Iraqi Sunnis were using Islamic State to strengthen their own claims.

“Arab chauvinists … tried to strengthen themselves through Daesh,” he said, using an Arabic term for Islamic State. They “supported the group on the basis that this would settle the fate of the so-called disputed areas. But they miscalculated.”

Kurds forced Islamic State out of Zumar in October 2014. The town is now tightly controlled by camouflage-wearing Kurdish security forces known as Asayish. Remaining Arab residents say they fear retaliation if they speak out. But quietly some say that Kurdish security forces have expelled hundreds of people accused of links with the militants. Kurds have taken over entire streets and areas that once belonged to Arabs.

Amnesty International puts the number of Arab residents barred from returning to their homes in all disputed areas – from the Syrian border in the west to the Iranian frontier in the east – in the tens of thousands.

The Kurds say only those with links to Islamic State are not allowed back, and point to the Arab communities who remain as proof there is no policy of demographic change.

“They know that they cannot completely empty the disputed territories of Arabs. That would just not be realistic. So they’ve taken as much as they could,” Donatella Rovera, Amnesty’s senior crisis response adviser, told Reuters. “From their perspective that’s progress.”

Around Zumar, wildlife is beginning to reclaim the smashed remains of several Arab villages. Former inhabitants, and even some Kurds, say the areas were bulldozed by the peshmerga. In several settlements outside the town, practically every home has been reduced to a pile of rubble. In one, the only building still intact is a mosque, its minaret towering above the ruins.

A spokesman for the Kurdistan Regional Government (KRG) said there was no coordinated effort to punish Arab residents or keep them from returning home. Where “individual houses have been occupied by neighbors, definitely the KRG will not tolerate this,” said Dindar Zebari, head of a government committee that has investigated reports of abuse in Zumar and other towns.

The man in charge of security in Zumar is Colonel Noruz Balati, who spent 17 years in prison during Saddam’s rule for his role in the Kurdish independence struggle.

Balati said as much as 80 percent of Zumar’s Arab population had joined or supported Islamic State when they occupied the town. Most of them, he said, had been settled in the area by Saddam and were not “original” Arabs whose families had been there for generations.

Only 50 Arab families, a minority of the town’s former population, have been allowed to return to Zumar, he said. He admits that others are displaced within Kurdish territory and have not been allowed home. “We are suspicious of them,” he said.

At the same time, Kurds whose own homes in villages outside Zumar were damaged or are still close to the front line have moved into the town.

“This house was empty so we moved in,” said Saeed Othman, a Kurdish teacher from the nearby village of Kahrez, sitting in the living room of a home in Zumar he has taken over. “We don’t know who or where the owner is.”

Almost everything in the house belongs to its former Arab owner, he said. “Only the television is mine.”

Some Kurds say they will go back to their own homes when it is safe, but others see no reason to leave.

“History repeats itself: The Kurds were displaced and now they have returned,” said Adnan Ibrahim, 39, a tailor’s tape measure draped over his neck. “Things have returned to their natural order.”

Zumar’s commercial district used to be predominantly Arab. Now shops have been renamed to reflect their new Kurdish proprietors.

On one street, men have their beards trimmed at a barber called “Martyrs of Kurdistan,” and in a nearby shop window two animal carcasses dangle beneath the sign “Peshmerga Butcher.”

A middle-aged Kurd arranging goods on a shelf in a small supermarket said the shop was not his but he felt entitled to it because his own business had been destroyed by Islamic State. Earlier that day, the real owner of the shop had come to ask for rent, but the Kurd had refused to pay, reasoning that the money could end up in the wrong hands because the Arab’s brother is living in Islamic State territory.

The Arab, whose house has also been occupied by Kurds, confirmed his brother is living under the jihadists’ rule, but said he was trapped there and did not back them. He later obtained permission from the Asayish to collect the rent, but the Kurd still refused to pay, he said.

“I said: you are my neighbor. You know me,” said the Arab by telephone from another nearby village where he now lives.

“DUHOK SUPPORTS ME, PESHMERGA PROTECT ME”

Zumar officially remains under the jurisdiction of Baghdad, which pays the salaries of most state workers, makes official appointments and is meant to fund local government budgets.

But there is little doubt who controls the town. The Iraqi flag is nowhere to be seen and Zumar’s administration is increasingly integrated into the neighboring Kurdish province of Duhok.

Ahmed Jaafar, the Kurd who heads the Zumar sub-district, said Baghdad had done nothing for the area. But Duhok had given him a 50 kilowatt electricity generator, ambulances and medicine.

“Administratively, officially, I belong to Nineveh province, but in practice Duhok supports me and the peshmerga protect me. This is the reality.”

Some Arabs living under Kurdish rule support the Kurds. “They (the peshmerga) liberated our lands with their blood,” said one Arab sheikh who earlier this year collected signatures on a petition for the Zumar area to be annexed to the region. “Our loyalty is to Kurdistan.”

The region’s Ainzala oilfield, with a capacity of 10,000 barrels per day, is still officially operated by Iraq’s state-run North Oil Company. But its workforce has fallen by around half because many Arab employees either joined the militants or are trapped in their territory. As a result, around 60 percent of workers are now Kurdish, up from 20 percent before Islamic State, according to the engineer in charge of the operation.

Abu Suhail summed up the prevailing mood: “We are tribal. If a man kills my brother, even if he is jailed for 20 years, when he is freed I must kill him,” he said. “Only then will it be over, truthfully. The state cannot control this. It is impossible.”