Member of Parliament for Ningo Prampram and Deputy CEO of MASLOC, Maame Afia Akoto, (MadamAfia Akoto) on Tuesday abandoned decorum and engaged in a dirty encounter on Facebook.

The two state officials used very unprintable words against each other as some party footsoldiers spurred them on.

Sam George accused the MASLOC boss of being a homosexual and advised her not stray into matters of the economy. Afia Akoto also called the MP an educated fool.

Below are screenshots of the dirty fight: 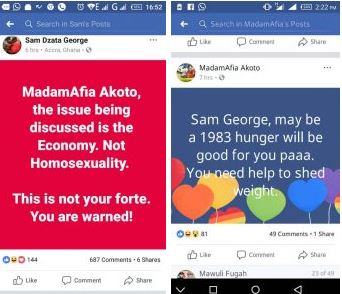