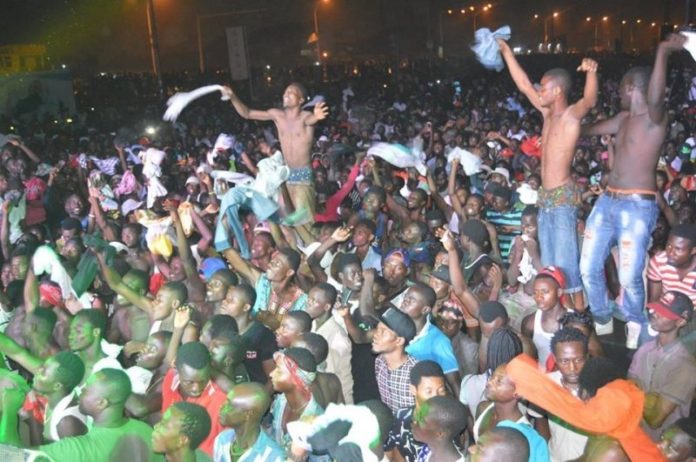 Award-winning rapper Sarkodie and dancehall king Shatta Wale have promised to thrill fans as they rally Ghanaians to preach peace ahead of the December 7 elections.

Head of Marketing at EIB Network, Jeff Sowa told Anita Erskine on Starr Drive that the buzz for the S-Concert has been great! “It’s going to be a great show,” he promised.

Sarkodie told Giovanni and Anita Erskine it is going to be a great platform to perform to songs he has dropped this year and never performed.

“It is definitely going to be a great platform, because I have actually been able to stay away from the stage for a while now and I really wanted to do this one because with the ‘S’ Concert you can’t go wrong, it’s all power packed, energetic and this is the kind of concert Sarkodie wants to be on,” Sark said.

The 2016 RTP DJ of the Year, DJ Vyrusky and Master Turntable DJ Mono will treat patrons to electrifying tunes from 6pm until you can’t take no more while Starr Drive’s co-host, Giovani Caleb and Live Nation will be the MC for the night.

Speaking to StarrFMonline.com, Master Turntable and super star DJ Mono said he will thrill fans and patrons to a memorable night.

”Whoever will step foot at ‘S’ Concert will never leave the same, I’m going to treat fans to all the tunes you can think of – back to back. Expect nothing but the best from me, you know how we do it at the ‘S’ Concert, it’s going to be liit,” DJ Mono assured.

‘S’ Concert, an initiative of Starr FM, commenced with the building of solidarity between brands that have their official references beginning with an ‘S’, including corporate brands and performing artistes.

The concert is being held under the theme ‘Biggest Peace Concert’ and aimed at using music and music stars to promote a peaceful atmosphere for Ghana’s general elections scheduled for December 7.

This year’s edition of the S-Concert is brought to you by Starr 103.5FM in partnership with ALOMO COOl UP and TRUE ROOTs.

The concert is being held under the theme ‘Biggest Peace Concert’ and aimed at using music and music stars to promote a peaceful atmosphere for Ghana’s general elections scheduled for December 7.

Go grab your ticket now at a cool 5ghc at the front desk of Starr FM, Live FM, Kasapa FM and GHOne before it runs out!

Tickets would be available at the gate too.