Until 25 September Buenos Aires food week is shining a light on the city’s passionate food culture, with gauchos (cowboys) barbecuing armadillos in streets overlooked by kitchens where chefs pore over molecular gastronomy. Whether or not you’re in time to catch the markets and special tasting menus (a full list of participating restaurants is available at bafoodweek.com), Argentina’s capital has started to warm up as spring takes hold, and has plenty to offer those keen to escape the rainy English autumn with a night or two of tango dancing or, in November, the renowned Open Polo Tournament (aapolo.com).

Buenos Aires sits on the south-west bank of the River Plate, close to the estuary. The districts of Monserrat and San Nicolas sit at its heart, the gentrified docklands of Puerto Madero to the east, historic San Telmo, and the traditionally working-class La Boca, south of the centre. North of San Nicolas are the green, affluent barrios of Retiro, Recoleta and Palermo.

From the airport take a Tienda Leon shuttle bus to central Puerto Madero, near the Sheraton Hotel (1) at 1299 Av Eduardo Madero (every 30 minutes; tiendaleon.com; single AR$190). Taxis charge AR$630 (£32). Both take 40 minutes to an hour, depending on traffic.

Encounter the city’s European history with a walk through Recoleta, where neo-classical mansions jostle with bustling street markets. From Las Heras metro station (4) turn right on to Av Gral Las Heras, then left onto Junin to stop at the haunting Recoleta cemetery (5), open daily from 7am-5.40pm. Eva Peron, the Argentine first lady whose story is told in Evita, is buried among its gothic mausoleums. 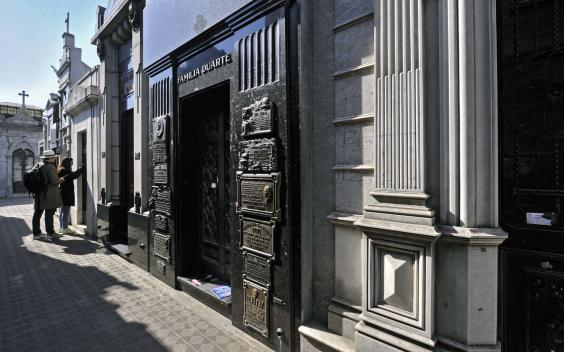 Then pass the gilded church of Nuestra Senora Del Pilar (6) and continue through the park to Av del Libertador and the Museum of Fine Art (7) at No 1473 (00 54 11 5288 9900; bellasartes.gob.ar; free entry; open 11am-8.30pm on weekdays and from 10am on weekends; closed Mondays). Seek out the classic Argentinian art hidden among its Van Goghs and the Rothkos, then compare and contrast down the road at the Museum of Latin American Art (Malba) (8) at 3415 Av Pres Figueroa Alcorta, where Yoko Ono’s exhibition Dream Come True runs until 31 October (00 54 11 4808 6500; malba.org.ar; entry AR$100; open 12pm-8pm Thursday through Monday and Wednesday till 9pm. Closed Tuesdays).

Lunch on the run

Bosques de Palermo lies on the edge of Palermo, a barrio so trendy it has subdivided itself into smaller neighbourhoods known locally as Palermo Soho and Palermo Hollywood. Nana’s (9) at 499 Pres Hipólito Yrigoyen (00 54 11 4837 9220; nana.com.ar), all exposed wood, brickwork and bare lightbulbs, serves up zingy, colourful salads – but also does a fine line in the Argentine staple, steak.

Pick through beaten up leatherwork and worn books in the antiques markets of cobbled San Telmo, one of Buenos Aires’ oldest neighbourhoods. On Sunday, Calle Defensa (10) turns into an enormous, bustling street market. 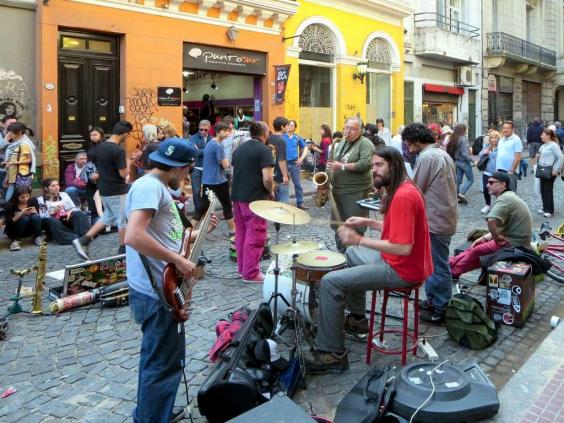 Is it a florist? Is it a record shop? No, it’s a speakeasy: hiding behind the door at the back of Floreria Atlantico (11) at 872 Arroyo (00 54 11 4313 6093; floreriaatlantico.com.ar) lies one of Buenos Aires’ best bars, serving up classic cocktails with an Argentine twist – like a dash of the herb yerba mate, for example.

Dine with the locals

Argentinian food draws heavily on the influence of its Italian immigrant community, with pizza restaurants on every street corner. One of the best is La Locanda (12) at 2697 José León Pagano (00 54 11 4806 6343; lalocandabuenosaires.com; closed Mondays); stepping into the cosy restaurant is like stepping into a Sicilian taverna. Try the local cheeses, the octopus or the juicy lasagna. 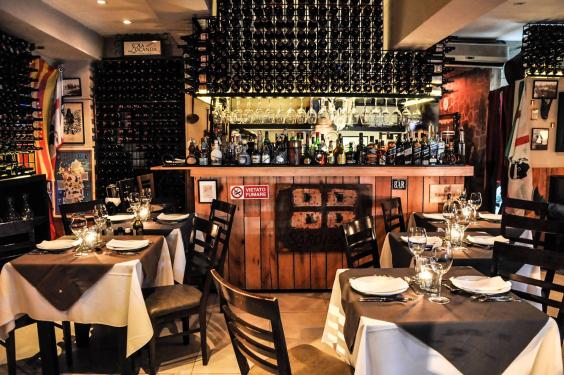 For a real local’s night out, elbow your way to a table at Cerveceria Nacional (13) at 1588 Arévalo (00 54 11 4771 3383;facebook.com/cervecerianacionalbar), a busy craft beer bar that serves excellent, fresh empanadas – a sort of Latin American twist on the Cornish pasty. Hours spent over drinks and small plates is the standard in Buenos Aires – with the added benefit that you won’t feel too full for tango dancing later.

Sunday morning: out to brunch

Puerto Madero waterfront has undergone a glistening refurbishment, and has become a hub for the new rich. Luckily, you don’t need to flash too much cash to enjoy brunch at Le Grill (14), a smart riverside spot at 876 Alicia Moreau de Justo (00 54 11 4331 0454; legrill.com.ar) that specialises – like most of Argentina – in grilled meat. Try the steak tasting plate for AR$550/£27.

A walk in the park

Walk off your steak in the nearby nature reserve, Reserva Ecológica Costanera Sur (15), which stretches across the old marshlands on the other side of the Rio Darsena Sur. Unbelievably peaceful, considering its central location, the park sits against an imposing backdrop of the city’s skyscrapers, but looks out across the Rio De La Plata to Uruguay on its eastern side.

Head out to Buenos Aires’s outlying districts – like Flores, where Pope Francis was born and grew up – aboard the clean, efficient and mostly air-conditioned underground system, Subte. Two of its six lines run north to south; the others run east to west. You can buy and charge SUBE cards from the ticket office; a ride costs a flat AR$7.50, no matter how many connections you make.

The bus system, with some 180 lines, is not for the faint hearted, but it is cheap – around AR$6 a ride – and does run throughout the night; you can only pay with a SUBE card. The tourist board’s interactive map (comollego.ba.gob.ar), is the easiest way to plan your route.

For a peek into Buenos Aires’ maritime past head south-east to the amazing, technicoloured streets of portside La Boca. The neighbourhood’s painted houses once hosted entire families in a single room; now, the floors of its restored homes belong to artists and sculptors who run open studios and galleries. 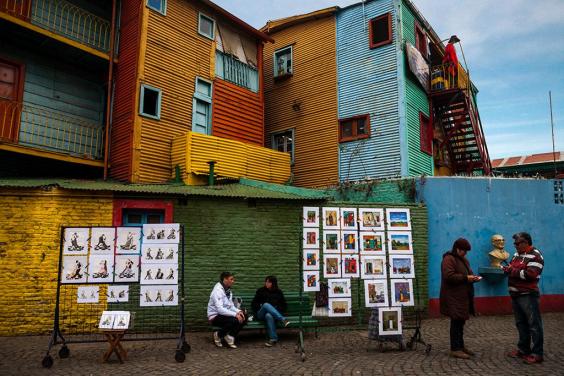 The Buenos Aires tourist board offers free guided walks around the barrio, which take in more than just the main tourist drag, theCaminito (16) (turismo.buenosaires.gob.ar/en/guidedtours).

The icing on the cake

Buenos Aires is the tango capital of the world; for an authentic experience, head to a milonga (a tango club) rather than a tourist show. A good place to start is Oliverio Girondo (17) at Vera 574 (facebook.com/OliverioGirondoEspacioCultural), which mixes a relaxed vibe with an exciting, messy vibrancy.

For all milongas, it’s worth booking ahead if you want a table, and bear in mind that the clubs only really get busy around 1-2am. Entry costs AR$100-150. Casual milongas like Girondo don’t mind learners having a go – but if you end up somewhere more conservative, it’s best just to watch and learn.

British Airways (ba.com) offers the only direct to flights from the UK to Buenos Aires’ Ministro Pistarini International Airport (18), operating once a day from Heathrow. Indirect options include Iberia (iberia.com) via Madrid and LATAM (latam.com) via Sao Paulo.

One of the grandest hotels in town, the Palacio Duhau (19) at (00 54 11 5171 1234; buenosaires.park.hyatt.com) offers plush rooms in both its refurbished mansion and the annexe building developed when it came under the Park Hyatt brand. Doubles from £413, not including breakfast. 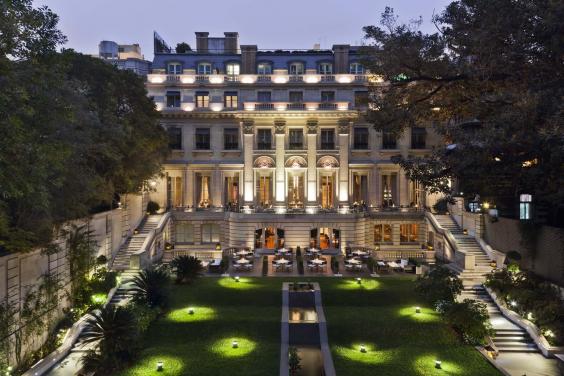 Feast your eyes on my compilation of the best of the bests in 4-star services you can get in Accra, Ghana.

Accra High court presided over by Justice Efua Novisi Aryene has set Monday, November 10, 2016 to rule on the suit by the PNC...

National Democratic Congress has lost five seats in the Upper West Regions in this year’s elections, according to provisional results.