A 67-year-old woman scheduled for routine cataract surgery in November thought it was just dry eye and old age causing her discomfort, she told her surgeons.

But what doctors at Solihull Hospital in the UK found to be the real cause of her discomfort was much more concerning: 27 contact lenses, stuck in the woman’s right eye in a “blue mass.”
Are you unsure about which option is better for your vision? Check this comparison between contacts vs glasses before buying any of them.
ADVERTISEMENT

The incident was described in an article published in the BMJ earlier this month.
Rupal Morjaria, a specialist trainee in ophthalmology and author of the paper, said the woman hadn’t complained about any visual trouble before the operation.
Richard Crombie, a consultant anesthetist at the hospital, was beginning to numb her eye for surgery when he found the first cluster of contacts.
“He put a speculum into the eye to hold the eye open as he put the anesthetic in, and he noticed a blue mass under the top eyelid,” Morjaria told CNN. 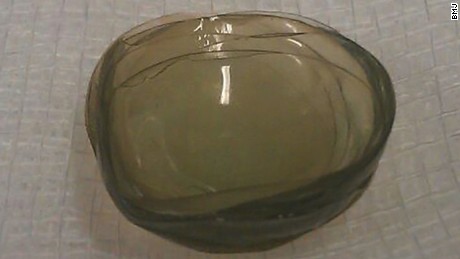 A mass of 17 lenses was found in the woman’s eye.
That mass was a clump of 17 lenses. The other 10 were discovered in an additional examination.
“We were all shocked,” Morjaria said. “We’ve never come across this.”
Dr. Thomas L. Steinemann, a clinical spokesman for the American Academy of Ophthalmology, said he’s seen patients have one lens stuck — but never 27.
“This is one for the record books, as far as I could tell,” he said.
The woman had been wearing monthly disposable contact lenses for 35 years, but it’s unclear how long they had been gathering in her eye. Sometimes, she told the surgeons, when she would try to remove a contact from that eye, she couldn’t find it.
The patient had just figured she’d dropped it somewhere, Morjaria explained, but it was actually getting stuck in her eye with the others.
And even though she’d accumulated 27 contacts in her right eye, the left eye was fine. Morjaria said the right eye had poorer vision, which might explain the imbalance.
Morjaria doesn’t know whether the woman had any appointments with an optometrist before the clump was discovered, but she doesn’t think she would have had regular checkups.
Morjaria said she and the other authors of the article want to raise awareness about the possible consequences of wearing contacts without having regular doctor appointments.
If contact wearers know that they didn’t take their lenses out and they’re feeling a “funny sensation in the eye,” Morjaria said, they need to get it checked.
Warning signs of a trapped contact lens include sharp or scratchy pain, light sensitivity and redness, Steinemann said. Dry eye has more of a gritty sensation.
Steinemann added that soft lenses, like the disposable ones the patient would have worn, can act as a sponge to soak up bacteria, which would have a “high likelihood” of infection.
The woman’s surgery was postponed after the contacts were removed because of that increased risk, Morjaria said. She came back two weeks later, feeling “so much better,” and had the surgery she had come in for in the first place.
Source : CNN

BREAKING: Deposed Assin North MP asks for solidarity in the face of travesty of Justice