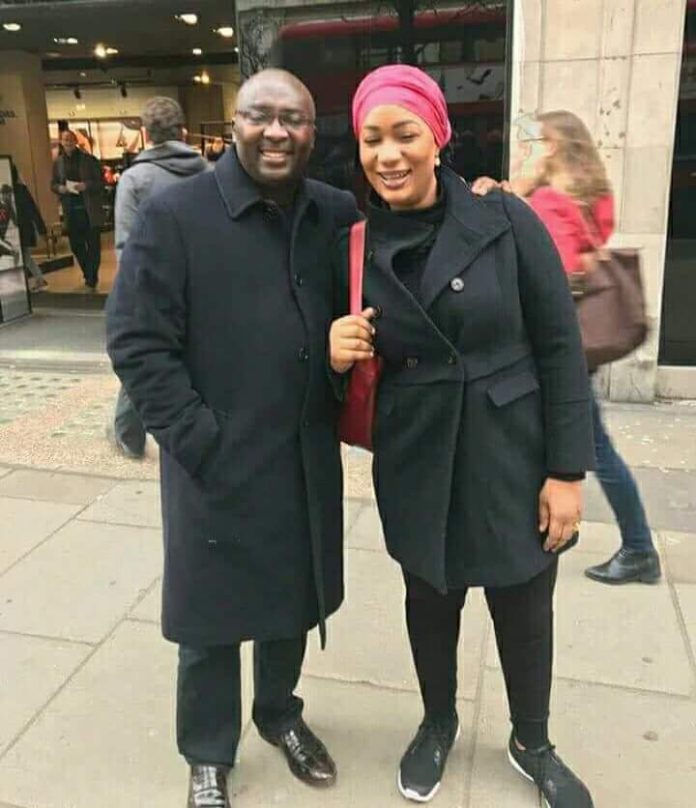 Dr Bawumia with his wife on the streets of London

Vice President of the Republic, Alhaji Dr Mahamudu Bawumia’s security was not breached last weeked when he stepped out onto the streets of London, where he has been on medical leave for the past one week, Minister of State in-charge of National Security, Bryan Acheampong has said.

Some Ghanaians became alarmed after a video emerged last week which captured the Vice President and his wife Samira, strolling on the streets of London unaccompanied by his usual security detail.

In the said video, a gentleman who’s said to be a Ghanaian resident in London spotted the Vice President and his wife, and after going past them, the gentleman ran back and exchanged pleasantries with the couple.

Skeptics even doubted the photos being recent ones, as they argued that though Vice President Bawumia’s visit is not an official state visit, there should have been an official security detail, which was absent in the photos and videos that were released.

None of the photos or the video that circulated gave even the slightest indication that a single bodyguard was assigned to provide security for the Vice President and his wife.

But speaking exclusively to Akwasi Nsiah on Simiso on Kasapa FM Monday evening, Hon. Bryan Acheampong dismissed such claims saying the Vice President had a good security cover by commercial security services, adding nothing has been left to chance regarding Dr Bawumia’s security irrespective of wherever he is.

“Whoever thinks that there was no security operatives with Bawumia when he stepped out on the streets of London with his wife, Samira will be doing a big mistake. I can assure you that he had adequate security when he was out on the street of London. The security set up worked perfectly. There is an effective security detail with Dr Bawumia wherever he goes while in the UK. The Vice President has fully obeyed the security set up that had been put in place for him. So far, things have gone the way we planned.”

Meanwhile, Hon. Bryan Acheampong who is currently in London has revealed that Dr Bawumia will return to Ghana by Friday, February 2, 2018,

The Second gentleman of the land accompanied by his wife, Samira, left Ghana on Friday, 19th January 2018, for the United Kingdom for medical leave, on the advice of his doctors.

The Presidency had earlier on that Friday announced that the Vice President, on the day reported not feeling well and was attended to by his doctors and was in stable condition.

There was mixed reactions on social media about the decision to go public that the Vice President had taken ill. Whereas others think the announcement was right, others are of the view that it was needless.

Some sympathizers of the opposition National Democratic Congress took to social media to speculate about the health of the Vice President. Some other persons mischievously went to the extent of circulating a photoshoped autopsy report claiming he had died.

Watch Video of Vice-PresidentBawumia and Samira taking a stroll in London: